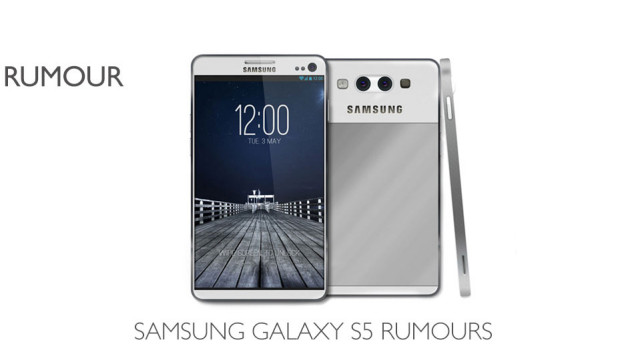 To follow up the hugely successful Galaxy S4, Samsung have been fairly tight lipped over the rumoured S5, but details are leaking out, with the handset possibly due out at the end of February.

With the screen resolution on the Galaxy S4 already at 441 pixels-per-inch, upping the ppi further seems a little bit of a waste of time, as the iPhone 5s only sports a 326ppi as Apple state that this is the point where the human eye can no longer see the pixels. So if Samsung do go to a rumoured 1440×2560 pixels, giving it a 560 pixels-per-inch, it seems more to be aimed at grabbing headlines rather than a useful addition. We will still bet money that Samsung will go for a hgher ppi count though, as Samsung are fabulous at giving the public what they think you want, rather than what you need.

Samsung should stick with the Super AMOLED screen that was found in the Galaxy S4, as this will provide a great way to the reach the 1440×2560 resolution, with a 5.25-inch screen size strongly hinted at, making the Galaxy S5 sightly larger than the 5-inch found on the S4.

As all previous Galaxy models have used Andriod, it’s a safe bet that it will continue with the S5. The latest version of Google’s OS is 4.4 KitKat which officially launched last October and has already been incorporated into Samsung’s Galaxy Note Pro range, so the Galaxy S5 should be sporting the new OS also, with their own interface overlaid over the top, although the TouchWiz overlay maybe slightly toned down compared to previous versions…hopefully.
Samsung are also tipped to improve their Air Gestures tech, which didn’t quite rock our world on the Galaxy S4 but with a bit of tweaking, should become more useful. Samsung may also have taken a design tip or two from the book of minimalist design that’s all the current rage, with app icons appearing flatter and simpler like the IOS7 style.

With Apple launching the first 64-bit processor with the iPhone 5S, this seems like the way premium smartphones will be heading, giving them all a major power boost and future proofing the app handling going forwards. Whether Samsung will follow suit just yet has been hotly contended recently, with analysts going back and forth on the issue. One rumour suggested that it may use the ARM 64-bit chip, although another has it running Qualcomm’s Snapdragon 800 quad-core chip clocked at 2.5GHz alongside an Adreno 330 CPU. AMD have already stated that they are looking to produce 128-bit mobile chips in 2015, so 64-bit does look promising for the S5.

The onboard memory will probably also get a boost with a rumoured 3GB DDR3 RAM being touted.

With the S4 already rocking a still great 13MP camera at the back, rumours are flying that the Galaxy S5 will sport a 16MP snapper, which would give an image size of 5312 x 2988. Compared to Sony’s Xperia Z1 at 20.7MP or even Nokia’s ridiculous 41MP, this may look a little small, but unless you are going to print your photos to fit your entire living wall, 16MP is a great standard for a pocket camera.
The sensor should be using the newly announced CMOS image sensor, which is designed to minimize crosstalk in the images, leading to sharper, crisper images. The image stabilization may also be improved, as anti-shake technology is a must for camera phones, with exisiting image stabilization correction maxing out at 0.7 degrees on other phones, the Galaxy S5 may be able to go to 1.5 degrees, which would make a huge difference to on-the-fly photo taking.

The fingerprint scanner on the iPhone 5s was probably the biggest headline for the Apple’s yearly update last year and Samsung are known to have patented their own scanner using hot corners at the edges of the screen to possibly unlock your phone. There is a good chance that this may make it onto the Galaxy S5, although Samsung have also been looking into retina scanning, using your iris to unlock or approve app purchases although this looks a unlightly so maybe on the Galaxy S6. Sammobile have reported that the Galaxy S5 will have a fingerprint sensor in the home button like the iPhone 5s, but it will use a vertical swipe of the finger rather than holding it on the sensor.

The one constant complaint with the S4 was that for a premium product, the plastic shell made it feel ever so slightly cheap, so will the Galaxy S5 change this to a metal body? Given Samsung’s love of the polycarbonate design, we doubt it, even though reports surfaced claiming that the company that produces the metal bodies for HTC and Apple will be doing the Galaxy S5 shells. If Samsung do stay with the polycarbonate shell, they will be the only premium smartphone maker to not use a metal body.
The Galaxy S5 is rumoured to have a slightly squarer design compared to previous models.

Samsung are holding a launch event on 24th February, with the tagline of ‘Unpacked 5’, so expect the Galaxy S5 to be on sale shortly after.Google+