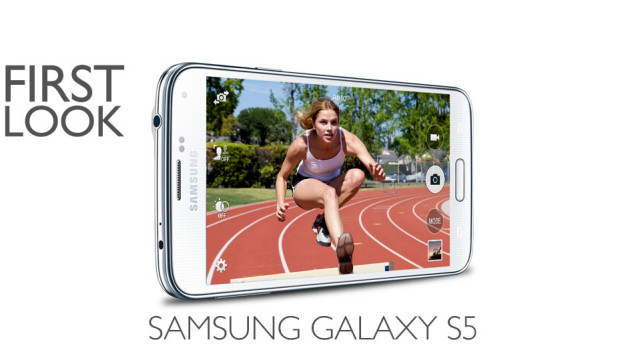 With the Galaxy S4 approaching its first birthday in April, Samsung have pulled the covers off their latest upgrade, called the Galaxy S5. With the S4’s sales performing badly after its initial six-month run, its surprised many industry watchers that it’s took this long to arrive, with many analysts predicting a January release. The S4 sold a respectable 40+ million units, slightly less than the 50 million the S3 managed, but Samsung themselves declared that they were disappointed with the figures. Apple’s iPhone 5s took some of the wind out of the S4’s momentum with Apple crushing it over the Christmas period, so can Samsung fight their way back with the Galaxy S5? 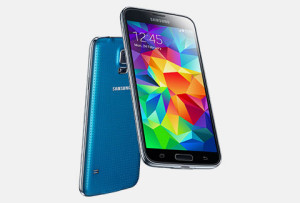 From a design perspective, the Galaxy S5 looks very similar to the S4, the Super AMOLED display has grown from 5.0” to 5.1”, with the resolution still set at 1920 x 1080 (or Full HD). This results in a slight drop in pixel density to 432 pixels per inch, but its nothing that you’ll be able to notice without a microscope.

The back is made from polycarbonate, but gives an almost rubbery feel and generally the whole build feels more premium than before, but not on the same levels as a full metal construction would have given it.

The back cover is also interchangeable and it still sports a handy microSD slot for expanding the storage up to a larger 128GB. Samsung have taken a note out of Sony Xperia Z1’s book by making it dust and water resistant to IP67 standards. This means that it will take a good soaking in the rain or the occasional splash back from a spilled drink, but it probably won’t stand going for a swim in the ocean… or the toilet.

As always, Samsung have upgraded the specs inside, with the new Quad-core 2.5GHz Snapdragon 801 powering things along, the RAM remains unchanged at 2GB and it now comes with Android 4.4.2 KitKat with the Samsung TouchWiz overlay.

Touchwiz has been streamlined from the version found on the S4, with a cleaner look and less of Samsung’s Bloatware, Samsung admitted last year that their software needed some work and committed around 40,000 of its 326,000 employees to its growing software development team ,with the Galaxy S5 being the first to benefit. 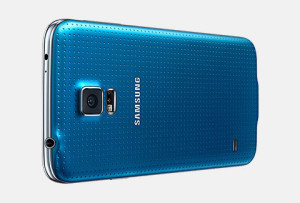 The camera has also seen a change with a 16MP sensor replacing the 13MP in last year’s model. Samsung have also introduced 4K video capture (or Ultra HD if you prefer) running at 30 frames per second.

Like the iPhone 5s, you now have the ability to record in slow-motion at 120 frames per second. On the still’s side, Samsung have introduced a Selective focus feature, which allows you to refocus your shots after you’ve taken them. The auto-focus has also been improved now working in just 0.3 seconds, allowing you to take shots even faster. The front snapper remains largely unchanged with a 2MP sensor.

One of the big new features of the S5 is the fingerprint sensor built into the home button. You use it by swiping downwards with your finger to unlock your phone, similar to the iPhone 5s. Where Samsung have tried to go a little further is by partnering with PayPal to allow users to authorise payments using just their fingerprint, no more logging in, just swipe and pay. You can also use your fingerprint to setup a private data locker to protect any sensitive data you may want to store.

Samsung have also been touting the S5′s faster downloading speeds by tethering the WiFi and 4G connections together to provide a larger bandwidth. Samsung have stated that potential speeds can reach as high as 650Mbs using the tethering. This seems an unlikely speed when used in the real world, especially as most download speeds over the internet are based around what your ISP and line can supply or what model of router you have, so whether this will actually be of any benefit is questionable. 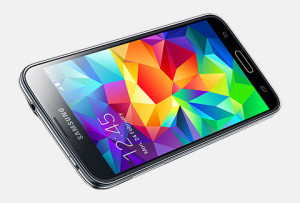 Samsung have also been hyping the fitness side of their technology, with the Galaxy S5 now equipped with a heart rate monitor built into the rear module near the LED flash. This can be used in conjunction with the S-Health 3.0 app to provide you with stats and info on your activity levels, with the phone working like a pedometer.

The last new feature worth mentioning is the power-saving mode. By turning this on you can extend the battery life by up to 24 hours, with the display turning black and white and all other services being restricted other than calls and text-messaging, a bit like a phone from 2002. This isn’t the most impressive of features but could prove handy in certain situations where you may be unable to charge your phone for a while.

Although there’s nothing earth-shattering about the galaxy S5, the 1080p screen is still a beauty and with the other new features on offer, the S5 is still top of the Android class. If you own an Galaxy S4 there’s not too much to convince you to dig deep and spend again, but if you’re in the market for a top spec Android phone then it should make your list. It may be worth hold off until HTC have confirmed their replacement for the HTC One and as check out the rather good Sony Xperia Z2, although price wise, there not going to be much to separate them.

A comparison of the Samsung Galaxy 1 to 5