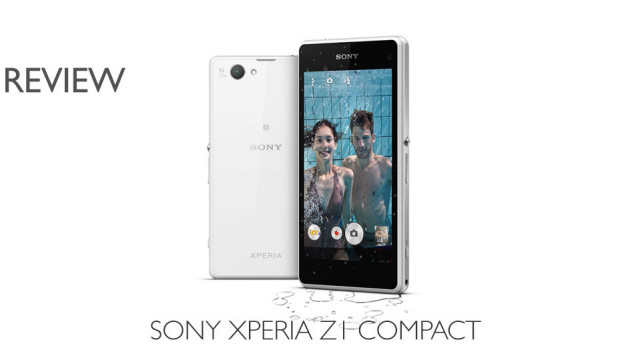 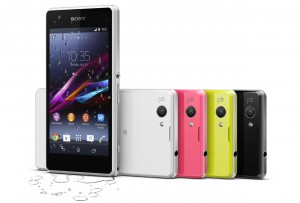 The single-piece aluminum frame fits perfectly into the hand due to the slight curving at the corners and feels solid enough. The back is covered with toughened glass but its prone to scratching, so a case may be required if you don’t want it look like your cat’s being using it. The front screen also seems to attract fingerprints, so if you are a bit OCD with having a clean screen, this could drive you insane.

The ports are all covered and with a SIM, MicroSD and charging port on the left hand side, with a camera button, volume control and power button on the right. The 3.5mm headphone jack is at the top uncovered.

The screen is 4.3 inches, which despite the compact tag is still larger than the iPhone 5s. It’s a TFT capacitive touch screen, rendering 720 x 1280 pixels resolution with 320 pixels-per-inch, making it a 720p display which looks great with nice clarity and a fairly vivid contrast.

Sony have also made the Sony Xperia Z1 Compact dust and waterproof, using the IP55 and IP58 standards, which can be a little vague to cypher, but it should mean that heavy rain should present no problem at the very least or even being dropped in the bath. 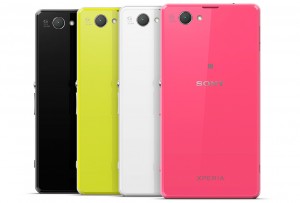 The specs on the Xperia Z1 Compact is where Sony have made the most effort, throwing out the unwritten rule that states compact or mini means less spec.

The Xperia Z1 sports a 2.2GHz quad core Krait 400 processor and a Qualcomm MSM8974 Snapdragon 800 chipset, giving it plenty of power, with multitasking between apps fast and fluid. Games also run without any lag and look great on the 720p screen. It comes with 16GB of storage, but you can expand this using a MircoSD card to 64GB. It also has 2GB of RAM, which when compared to the 1GB found on the iPhone 5s shows how good the spec’s are.

It runs on the Android 4.3 Jelly Bean operating system, which given that the updated 4.4 KitKat has been around for a few months now is a little disappointing, but Sony may change this with a firmware update in the future. Sony have overlaid the OS with their own interface which is clean and well thought out with a few nice touches like the app drawer, although the on-screen keyboard is a bit fiddly, especially for people texting in a hurry or folks with fat fingers.

Sony haven’t scrimped with the camera either, as the Xperia Z1 Compact sports the same snapper from the larger Z1, namely the 20.7MP sensor and G lens system. This is still one of the largest resolution cameras on the market (apart from the Nokia Lumia 1020’s 41MP beast) and provides some decent quality images, which can be cropped quite aggressively due to the enhanced size. The quality was superb outside in well-lit areas, but a noticeable amount of noise creeps in when the lighting is lower, producing slightly muddy looking shots. The dedicated camera button on the side is a great addition which makes the process of quickly taking a photo a breeze. Sony have also included a range of creative modes to enhance your images in-camera.

With flagship touting specs, the Sony Xperia Z1 Compact comes fitted with a 2300mAh battery, this would normally sound a little under-powered, but given the size reduction of the screen over its big brother and the more efficient CPU compared to other compact phones, this provides a decent amount of usage between recharges. 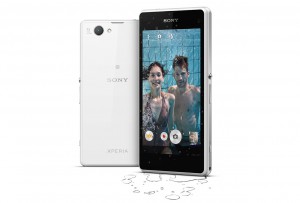 One advantage over the competition is that if you own a PlayStation 3 DualShock controller, you can connect this to your phone via a (not supplied) USB cable and then use it to control your games.

The Sony Xperia Z1 Compact is a solid piece of kit, with a great camera, good battery life, a 720p screen and a not unreasonable price-tag. With the addition of being waterproof and a beauty to hold, this is by far the best ‘compact’ version of any flagship phone currently out there.

A great phone at a reasonable price.

Is The New Sony Xperia Z2 Going to be a Galaxy Killer? →